Our research shows that the earth’s climate is not being changed significantly due to mankind.

Our findings: 1) Earth is not currently getting warmer due to things mankind is doing. The average global surface temperature and sea level has not changed significantly for 8,000 years (including 1850 to 2000). Since daily temperatures were recorded in the early 1800’s, in some locations around the world, there have been periodic random major fluctuations in temperature and drought conditions that killed humans and animals. These have been without pattern and not linked to mankind activity. Over the previous 5 million years, the Earth got 6 degrees colder then increased 6 degrees to today’s average. Over the previous 67 million years, the Earth has gone through centigrade temperature changes starting at +8 degrees. rising to +14 degrees, lowering to -6 degrees (a 20 degree swing from today) with large temperature spikes for many years in either direction. 2) Gasoline can be easily replaced by natural gas to reduce emissions. 3) Natural gas generates electricity cheaper than solar panels, batteries and wind power and it is more Eco-friendly in terms of natural resources, manufacturing and recycling. 4) C02 atmospheric conditions are heavily influenced by the Sun’s relationship to Earth.

Some Media do not always present weather objectively, for example, the following views of United Kingdom daily temperatures in 2009 and today present “TODAY” as “HOT”, but the actual temperatures are generally lower than 13-years ago. 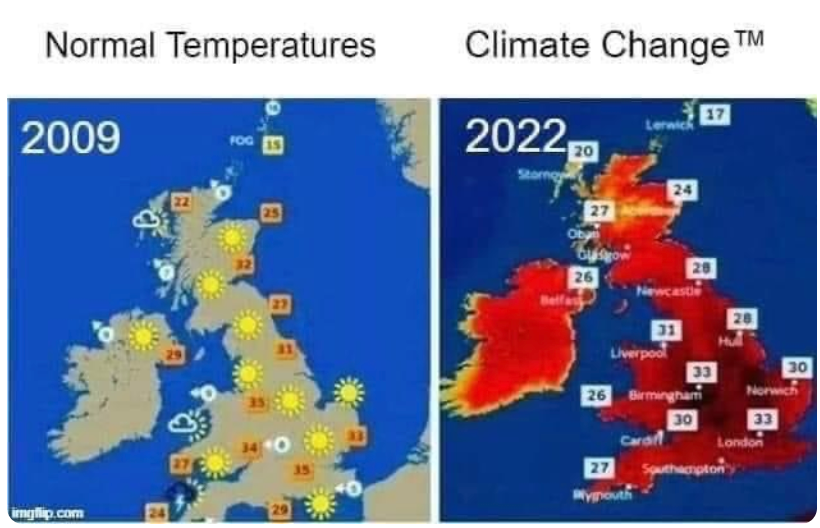